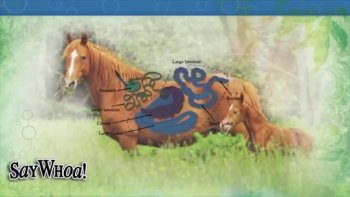 Mouth: Feeds are mixed with saliva in the mouth to make a moist bolus that can be easily swallowed. Three pairs of glands produce saliva. Horses will produce up to 10 gallons (85 lb.) of saliva per day. No wonder horses need water at all times to keep hydrated. Depending on the weather, horses will drink from 10 to 20 gallons of water a day. Drinking adequate amounts of water will lessen the risk of having impaction colic. Check waters daily. I think dehydration is the number one cause of impaction colic.

Teeth: Horses need to chew their feed for better digestion to occur. By breaking down the feed stuffs, it allows the enzymatic and microbial action to penetrate the plant cell walls and digest feed more efficiently. The horse needs healthy teeth to grind feed. Teeth should be examined during the annual health check to ensure that they are wearing normally. The horse's upper jaw is wider than the lower jaw, so sharp points often develop on the molar teeth. If your horse is dropping feed out of their mouths, this may be an indication that points have formed on the teeth and they are cutting the inside of their mouth as they chew. These points may prevent normal chewing which reduces the food value received from the feed and may predispose a horse to colic. Filing (or floating) the teeth will remove the points.

Esophagus: The esophagus is a simple muscular tube that takes food from the mouth to the stomach and is about 4-5 feet in length. A muscular ring,called the cardiac sphincter, connects the stomach to the esophagus. Because of the angle that it attaches to the stomach and the fact that this muscle is very strong this explains why it's almost impossible for a horse to vomit.

Stomach: The stomach of the horse is small in relation to the horses' large body. This limits the amount of
feed a horse can take in at one time. The natural feeding habit of the horse is to graze on small amounts of roughages often. The average sized horse (800 to 1200 lbs.) has a stomach with a capacity of only four gallons. In the stomach breakdown of feed stuffs are accomplished by bacteria that produce lactic acid, other acids and the enzyme pepsin. The end product is food broken down into chyme (The term used to refer to partially digested food as it moves through the digestive tract).

For full digestion to take place, feed may stay in the stomach for up to 24 hours before it moves on. The stomach works best when it contains 2 gallons of feed for full digestion to occur. The fact is that the stomach empties when it becomes 2/3 full, whether stomach enzymes have completed their processing of the food or not. Because of the way a horses' digestive system is designed, it runs more efficiently to feed horses small meals often. However, horses are now housed in stalls or pens which do not allow grasses to grow. Horse owners ration the feed. Horses are now expected to eat large amounts of concentrate once or twice a day. If you feed a large amount of concentrated grains and hay at one time and the stomach becomes more than 2/3 full it may only stay in the stomach for as little as 15 minutes before it is passed on. This means the feed stuffs are not fully digested and may predispose your horse to impaction colic. To avoid this potential problem continuous foraging or several small feedings per day are preferable to one or two large ones. The rate of passage of food through the stomach is highly variable, depending on how the horse is fed.

It then leaves the stomach through the pyloric valve, which controls the flow of food out of stomach and into the
small intestine.

Duodenum: The majority of digestion occurs in the duodenum as bile from the liver aids in digesting. Horses do not have a gallbladder, so bile flows constantly.

Jejunum: The Jejunum is important in re-absorption process of bile salts and absorption of nutrients
during digestion and is the part of the small intestine where the majority of nutrient absorption occurs.

Ilium: This part of the upper gut is primarily a transition area between large and small intestines.

Cecum: The cecum is the first section of the large intestine; a pouch, about 4 feet long that holds 7 to 8 gallons of digestive chyme. It is a microbial fermentation vat, similar to the rumen in a cow. These microbes produce specialized enzymes which ferment and break down the cellulose structures of fibrous feeds like hay or any material that was not digested in the small intestine. These bacteria feed upon the chyme, which will remain in the cecum for about seven hours, allowing bacteria time to start breaking it down. The microbes will produce vitamin K, B-complex vitamins, proteins, and fatty acids. The vitamins and fatty acids will be absorbed.

A potential problem is because of the unique design of the cecum. Its entrance and exit are both at the top of the organ. This means that the feed enters at the top, mixes throughout, and is then expelled up at the top. This design is the cause of problems if an animal eats a lot of dry feeds without adequate water or if a rapid change of diet occurs. The reason horses must have their diets changed slowly is that the microbial population in a cecum is somewhat specific as to what feed stuffs it can digest. The bacteria in the cecum are slow to modify and adapt to the different chemical structure of new feeds. Too abrupt a change in diet can cause colic, as the new food is not properly digested. Both of these reasons may cause an impaction in the lower end of the cecum.

A good formula to follow with is a concentrated grain based feed or new type hay:

Avoid Sudden Feed Changes: If a change of feed occurs, it takes about three weeks to develop a microbial population that can digest a new feed and maintain a normal flow through the cecum.

Week 1: Feed a mix of three-fourths of the old ration and one-fourth of the new feed.

Week 3: Feed a mix of one-fourth of the old ration and three-fourths of the new feed.

Colon: The large colon, small colon, and rectum make up the remainder of the large intestine.

Microbial digestion continues, and most of the nutrients made through microbial digestion are absorbed here. Water is also absorbed, resulting into the formation of fecal balls. These fecal balls, which are the undigested roughage and mostly indigestible portion of what was fed, are then passed from the rectum.

Large Colon: The large colon is 10-12 feet long and holds up to 20 gallons of semi-liquid matter. It is made up of the right lower (ventral) colon, the left lower (ventral) colon, the left upper (dorsal) colon, the right upper (dorsal) colon, and the transverse colon, in that order. The main purpose of the large colon is to absorb carbohydrates, which were broken down from cellulose in the cecum. Due to its many twists and turns, it is a common place for a type of horse colic called an impaction.

Three tight bends in the large colon arise where these segments meet each other, and these are termed the sterna, diaphragmatic and pelvic flexures.

Small Colon: The small colon is 10-12 feet in length and holds only 5 gallons of material.
It is the area where the majority of water in the horse's diet is absorbed, and is the place where fecal balls are formed.

Rectum: The rectum is about one foot long, and acts as a holding chamber for waste matter, which is then
expelled from the body via the anus.

Part 3 - will continue on April 29th. By understanding the mechanics of the colon (Part 2), we have a better understanding how to treat the problem and not the symptoms. We will realize that the past ways to treat impaction colic, is not the right way. That is why Colic is the number one reason of deaths in horses. These methods have been used over the last 50 years. Did you ever think; when are they going to create something that works? Learn why SayWhoa! Should always be kept on your shelf and "how" it works differently than any other product. There will be a special Coupon Code in the blog, so be sure to save money on your next order.

Signup for our Newsletter